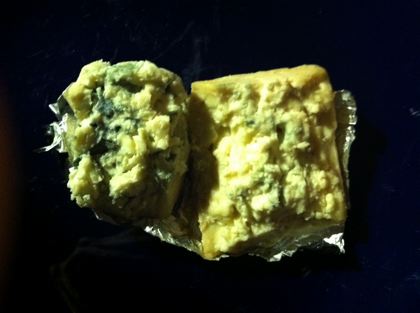 This photo is of the remains of a wedge of wonderful, melt-in-your-mouth Bleu D Auvergne Terre Des Volcans.

It is delicious with crisp apples.  The missing part of the wedge was enjoyed with two Pink Ladies – who did not hang around long enough to be photographed, i.e. Yum!

What makes this cheese extra special is that I was given it today by a Whole Foods employee.  I had accidently left it in my basket and realized it after I paid for the rest of the groceries.  I handed it to the clerk to have him ring it up.  He looked at the price – which was under $5 – and said don’t worry about it and handed it back to me.

I have a strong hunch that he was allowed to do that.  He was empowered as a staff member of Whole Foods to make a decision to give it to me.  It was a smart choice because the store was busy and I am sure the people in line were thankful that he did not have to do a second transaction, but it also was a kind choice and much appreciated.  For the price of $4.27 Whole Foods gained a lot of points in my book.  It is a store I will keep coming back to.

Things like this matter to me – empowering employees and also treating patrons well.

There is another store similar to Whole Foods that is much closer to me.  But I use it only for emergency shopping.  Why?  I am sick of their fliers that look like they are advertising sales but are really just listing the prices they always charge.  It is trickery and I am sure it does trick people into buying something because they think it is on sale.  For those of us who know they are doing it, it just leaves a bad taste of distrust which does not build customer loyalty.

When I mentioned my dislike of that type of advertising to two staff at that store (Ballard Market) the reply was “Oh, all the stores do that.”   Nope!  I started watching the ads I receive from other local stores (QFC & Safeway) and no, they do not do that or at least do it to a far lesser extent.

The culture of an organization is defined in the Business Dictionary as:

Pervasive, deep, largely subconscious, and tacit code that gives the ‘feel’ of an organization … It manifests in (1) the ways the organization conducts its business, treats its employees, customers, and the wider community, (2) the extent to which autonomy and freedom is allowed in decision making, developing new ideas, and personal expression, (3) how power and information flow through its hierarchy, and (4) the strength of employee commitment towards collective objectives.

This is not new information.  Books and articles have been written about organizational culture for over 20 years – and probably longer!  The business world is also full of information about empowering employees to create customer loyalty.  It’s the basics of good marketing!  It absolutely amazes me that some companies still don’t get it.

Due to the fact that AT&T does not empower their employees I now have a Verizon iPhone.  Boy!  Did it ever feel good to tell AT&T goodbye!  So stupid on their part.

The back story there is that I tried to get an iPhone way back in early fall 2010 but AT&T claimed I was not eligible for a new phone – ignoring the fact that their information was incorrect. I was actually on a month to month plan and using a 3 year old device.  I talked with people at AT&T by phone more than once. I went into two different Seattle AT&T stores. And I also went to the Seattle Apple store.  All of the employees I spoke with claimed they “could do nothing”.  They all said that I could not get an iPhone until April unless I wanted to buy one at full price – around $600 – which came with a mandatory two year contract to boot.  Umm – I don’t think so!

I switched to Verizon as soon as they started carrying the iPhone.  Of course after I switched over to Verizon –  I get a call from AT&T expressing concern and caring and wondering why I had left them!  Oh right! A little late and a lotta false! And the thing is, I will never go back to AT&T if I can help it!  I do not want to be tied to a company where the lowly employees are not allowed to take action to rectify a problem . . . and procure a customer’s loyalty.